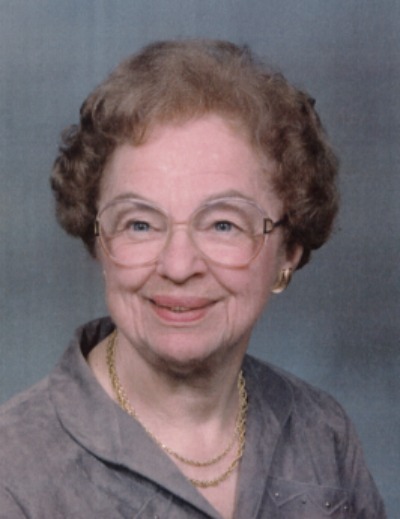 Ruth Freidenburg, age 103, of East Mountain section of Scranton, died Friday May 26th, 2017 at Scranton Healthcare Center. She was the widow of Rev. Leland D. Freidenburg, a World War II Army Chaplain who died in 1964.

Born in Scranton, she was the daughter of the late Karl and Minna Faust Haupt. She was a member of the Elm Park Methodist Church, its Altar Guild, Women of Elm Park and the Wesleyan Circle.

She was a graduate of Central High School, of Marywood University and received an M.A. Degree in German from Pennsylvania State University. She was awarded an NDEA grant to study German in Munich, Germany under the sponsorship of Lewis and Clark University. She also chaperoned a group of her students to Germany on three occasions.

She was teaching German at Central High School when she retired in1978. She had also taught at West Scranton High School and Moscow High School and spent two years at Keystone College, where she taught English and Play Production.

She was past president of the Century Club of Scranton and also of Mu Chapter, Delta Kappa Gamma, an educational organization. She was a member of the American Association of University Women and of PASR, a retired teachers organization.

There will be a graveside service in Forrest Hills Cemetery on Sunday, June 11 at 1 PM. Arrangements have been entrusted to the Corey Brian Strauch Services, LLC, Scranton.

Memorial contributions may be made to the Elm Park United Methodist Church or the Century Club of Scranton.

Offer Condolence for the family of Ruth Freidenburg