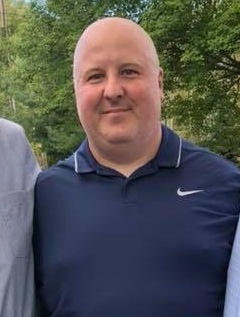 Christopher Joseph Genovese, 44, of Scranton, died Monday at home. He is the husband of April Ann Witkoski Genovese. The couple was married 17 years this August.
Born in Scranton, the son of Blodwyn “Maggie” Kayes Genovese of Scranton and Joseph Genovese of Clark Summit. He was a 1994 graduate of Abington Heights High School. Before their closing in 2013 he was a driver for Hazzouri Brothers for 13 years. He then worked as a dispatcher for Erie Materials for several years.
He was a dedicated husband and father. His family was his world. He coached all his sons’ sports teams and enjoyed spending every waking moment with his family.
Chris was an avid sportsman who loved hunting and fishing. He enjoyed playing softball, bowling, golf and horseshoes. He was a lifelong Yankees and Steelers fan.
His family would like to extend a special thank you to the paramedics and law enforcement for all they did for Chris and his family in their time of need.
Also surviving are his two sons, Sean Patrick and Gavin Christopher, at home; a sister, Kristen Andrews and husband, Todd, Montrose; a sister-in-law, Amy Lucke and husband, Lashawn, Moscow; nieces, Marley and Isabella; nephews, Desmond, Kameron and Mateo; and George Campbell, Maggie’s companion.
He was preceded in death by his aunt, Madelyn Kayes; and his mother-in-law, Patricia Witkoski.
A Mass of Christian Burial will be celebrated Tuesday at 10 am in Immaculate Conception Church, 801 Taylor Ave., Scranton, with Monsignor John Sempa officiating. Interment to follow in Cathedral Cemetery, Scranton. Friends and family are asked to go directly to church for the Mass.
A viewing will be held Monday from 5 to 8 p.m. at the Corey Brian Strauch Services, funeral home location, 602 Birch St., Scranton.
In lieu of flowers, memorial contributions may be made to the family which will be used for his sons’ further education.

Offer Condolence for the family of Christopher Joseph Genovese