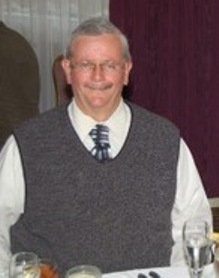 Born in Scranton, Son of the late Arthur and Frances Costanzo Ferrari he was a graduate of Scranton Technical High School. Known as the “Knife Man”, he worked at the family business, Scranton Grinder and Hardware as a knife, cutlery and sharpening salesman for his entire career. A member of the former St. Paul’s United Methodist Church, Scranton, he most recently attended the Moscow United Methodist Church. He served six years with the National Guard as a Chaplain’s Assistant. For over 40 years he served as Chaplain for the Chinchilla Hose Company, a position he was continually elected to. A faithful blood donor for many years, he met his wife while she was a nurse with the Red Cross. He continued donating until his cancer diagnosis in 2006.

He was preceded in death by his brother Joseph Ferrari in February 2019.

A visitation will be held Tuesday from 4-6:45PM in the funeral home.

Memorial contributions may be made to the American Red Cross, the Chinchilla Hose Company or WPEL Broadcasting.

Offer Condolence for the family of Arthur M. Ferrari Jr.